One of the most well-known rifle cartridges around the world, the 7.62×39 is an intermediate rifle round that was developed by the Soviets during World War II. The 7.62×39 cartridge is synonymous with the AK-47, SKS rifles and the RPD and RPK light machine guns. It provides a good range performance along with solid terminal ballistics. Barnaul 7.62×39.

More so, this fine new production ammunition is imported from Russia by Barnaul. These fine cartridges are lacquer coated steel cased, non-corrosive and Berdan primed. These make for remarkable target and training rounds at a great price. Comes packaged 20 rounds per box, 25 boxes per case for a total of 500 rounds. Barnaul 7.62×39. 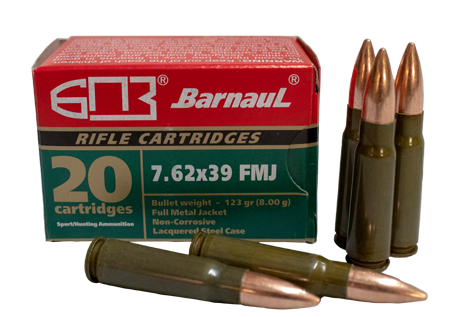 Barnaul Ammunition has a rich history dating back to the 19th century. Its origins stem from Saint Petersburg where one of Russia’s first cartridge plants was founded. This ammunition factory, which was designated as Arsenal P, provided the Russian army with ammunition during World War I. Barnaul 7.62×39.

In 1918 Arsenal P was evacuated because of the Russian Civil War and was re-established in Podolsk. In 1941 during World War II, the plant was again evacuated and re-established in its current location in Barnaul. For decades Barnaul ammunition has been used by military personnel around the world.

There are no reviews yet.